and so we come to the final weeks of another year! Give yourself a big pat on the back! You made it! That’s not always easy to do, ya know? Don’t let any of that Holiday-type stuff get you down, because…totally not worth worrying about. In this day and age one can boycott the Holiday Season but I’m not that much of a revolutionary, so I’ll just ignore most of it. I had a pretty happening Thanksgiving and Xmas the last two years, so except for a dinner with some fam this weekend, I’m gonna be taking it easy. 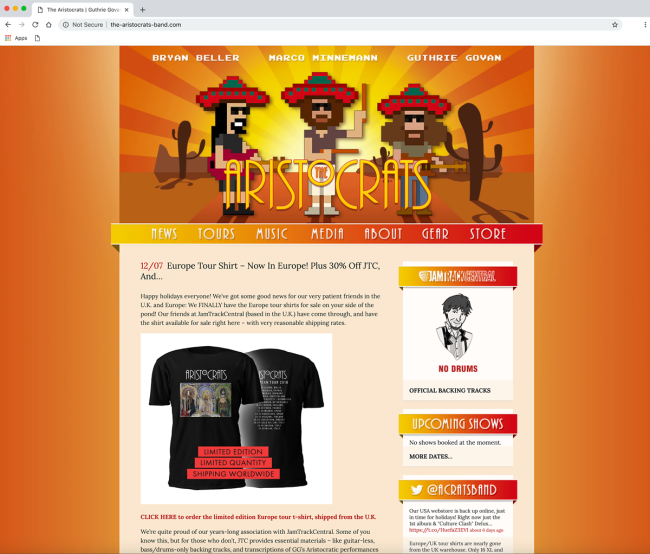 Last month in Tidbit IV I wrote about how I had “discovered” The Aristocrats; a funky fusion band that stars guitar sensation Guthrie Govan. I’ve seen a lot of Guthrie on YouTube over the years; in addition to being an amazing guitarist/player/teacher, he has always introduced himself like, “Hey, it’s Guthrie” like it’s no biggie and he was the guy you smoked spliffs with the night before. But he has this very formal-type of British accent so it’s like you hung out and smoked spliffs with royalty the night before…Way cool. Anyway, I promised to buy the latest music and report back and true to my word, I have done that and now own the Tres Cabelleros album. The music is actually older than I thought; it was recorded many years ago in 2015. The band: Guthrie Govan guitars, Bryan Beller Bass and Marco Minnemann drums, convened at legendary Sunset Sound studios in Hollywood, USA and banged out nine absolutely FUSION tunes. I haven’t listened enough to write a proper review, but this music is definitely TIP-TOP great and recalls the best of Zappa, Jeff Beck, Satriani, Di Meola, but is also thoroughly original. All three musicians are fan-friggin-tastic and Guthrie does some totally mind-blowing things on the guitar. Much of this material is also online in video form, so you can check it out for yourself, without even buying the music! (But if it rubs you the right way, you should probably buy the music). I’m just not sure about the name…it’s more than likely a British thing. If you search for “The Aristocrats” though you either come upon a movie you probably don’t want to see or that dirty joke…that someone made a movie about that you probably don’t want to see. But I guess the band likes it and at this point it’s too late to change.

Speaking of buying the music, well that’s the other interesting part of this story. As you know, I have been doing my best to keep up with ever–expanding landscape of the musical/guitar/instrument business and have written on the topic many times. How and where I bought The Aristocrats music is pretty neato because I didn’t get it on iTunes, or @Amazon or from some CD clearinghouse online or even a boutique dealer here in NYC that specializes in hard-to-find music that pretty much nobody is going to buy (proportionally I mean). I purchased the music through Jam Track Central, which is an instrument instruction site based in the UK. I had the option to buy just the band’s music or the music and some backing tracks or a Grand Pack that included tabs, backing tracks and the music. Pretty awesome and the exactly correct place for this band to be as the people who are going to be the most into it will probably (at least a few of them) want to learn how to play it.

I’ve certainly profiled other teachers, teaching tools and teaching sites over the years; that was always a major focus from the beginning of this blog. You can find a nice list in the right column. The JTC site is certainly in the same ballpark as DC Music School and The Rosenberg Academy, both of which I have written about here over the years. I’ve been a member/buyer of both places and now am a member of JTC! They even send me their Help Wanted notices! I also wrote in review of Gypsy Jazz stylist Romane’s CD Gypsy Fire, that the disc came with tabs and a second disc that contained backing tracks! So this is an idea that has been around for a while and is an effective method of organizing and providing content to a specific audience and “teh tech” allows it to be provided easily and at a low-cost. I’ll admit that personally, I’m too long in the tooth to be taking on a further guitar instruction, but that’s okay. I can still take advantage of the listening end and hopefully younger players will jump on all of this stuff and make good use of it because it’s a great way to learn a whole lot of cool stuff quickly!

In other news…Lately I have been a music reviewing machine! There is new content in the Rock and ALT/Jazz sections of the site and more to come! Look for The Aristocrats review soon! Great to read when you’re bored at work!

Finally, a few months ago in this post I questioned the purpose of Bohemian Rhapsody, the Freddie Mercury biopic, and sort of, kind of predicted it would flop. Boy was I wrong about that! I haven’t seen it myself but a few people I know, NONE OF WHOM WAS EVER A QUEEN FAN saw it, thought it was great and then proceeded to buy Bicycle Race or something! I guess that’s a good thing. One of these people is a younger female and it’s pretty funny talking about Queen or classic rock with her. Or anything actually. ‘Cause before she saw this movie no music produced prior to Shakira!! was worth more than a big EWWWWW. But now she’s an expert on Queen and 70s Rock. Whatever it takes to get more people into great music is fine with me! Movies like Bohemian Rhapsody function as stealth marketing for people who would never listen otherwise. If I would’ve given this chick a CD (LOL a CD…what are you? A million years old?) of Queen’s Greatest Hits it would’ve never been opened. But, by making an updated version of the story that checks all of the right boxes on current-year thinking and sensibilities with some hot young actors and actresses…GOLD MINE! Genius! Brilliant! So I guess I learned something there. On the other hand…I’ve gotten back to being semi-active on social media and have learned that there’s a lot of hate for Rock Holograms out there in the universe…so on that front…WINNING!

This site uses Akismet to reduce spam. Learn how your comment data is processed.