The first installment of the new GuitarSong series profiles David Gilmour and the song Dogs, from the 1977 Pink Floyd Animals disc. The energy, emotion and musical brilliance this 17+ minute piece of music contains is the stuff of classic rock legend. If anything, the appreciation fans and guitar players have for this tune has only grown over the years, so hopefully if you are searching for some info on it, this post will help.

Although the Animals disc is usually referred to as the beginning of serious fracturing within the band, the results of the time in the studio with collaborator Brian Humphries produced very interesting, cohesive results and the album and subsequent tour were very successful. The dark, dystopian vision borrowed from George Orwell’s Animal Farm was a bizarre choice of direction in what was for many people, sunny 1976-77. But the band, especially Roger Waters, were always very prescient about the future, which is why, in some respects, the album resonates more now that it did forty years ago. The gist of the Rolling Stone review from 1977: “Eh…what’s with the negativity when we could be spacing out to another album like Dark Side?” Even if one doesn’t share Waters’ doom gloom over capitalist society and the future that is now (and Gilmour has stated repeatedly that in many respects he doesn’t), he does manage to hit on several themes that certainly make life complicated and miserable for many. I don’t think the band’s later offerings would be at all popular if they weren’t grounded in reality that many people can identify with.

Of course, David Gilmour needs no introduction. He has been a legend in the world of music since the 1960s, not only as a talented, very lyrical and emotionally-driven guitarist, but also as a genius writer of many a great piece of music. By the time the he and the rest of the band went into the studio to record Animals they were a major powerhouse rock group. Their album from three years earlier, The Dark Side of the Moon was still on the charts! Gilmour would only add to his already impressive legacy with his writing, playing and singing on Dogs, and his playing on Sheep and Pigs (3 Different Ones) on this album. 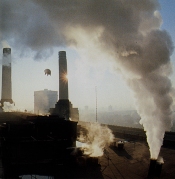 Dogs evolved over the course of a couple of years. It was originally titled You Gotta be Crazy and was “begun” in 1974 when the band needed more material for their live show. Gilmour, who wrote most of the music to Dogs, has always been particularly proud of the initial chord sequence. The original version was very different and not so impressive compared to what would become the final definitive tune. After much tweaking and changing the song reappeared during sessions for what would become Animals. Floyd had just moved into a studio they had put together for themselves at Britannia Row and because Roger Waters, who was helping with early tracking, left a “record” button on, the world has never heard what David Gilmour has always believed to have been the best solos he has ever played on the song. So…of course, everyone who has heard the disc over the years is hearing his second best, which is pretty impressive don’t you think? [There were some alternate versions of Animals tunes here, but some of them, including Dogs, don’t seem to be available anymore].

The song is in the key of D minor. The acoustic riffs that drive the initial part of the song are E minor position chords played on a Ovation Steel string detuned to the key of D. This chord progression is unusual in that it really never resolves; it just comes to the end of it’s cycle and begins again, which underscores the pointlessness of the lifestyle the lyrics are trying to convey. (For a full breakdown of the song’s harmonic and melodic development follow the 2nd and 3rd link below). The song breaks down and modulates to the key of F major and Gilmour plays several (5) solos over these two parts. There is a long keyboard (funeral section) part in the middle that has very little instrumentation save for a kick drum and high hat and then the song returns to the original progression with Roger Waters singing instead of Gilmour. In every other respect this part is identical to the beginning of the song with more Gilmour soloing that culminates in the amazing descending augmented triads that finally resolve the chord progression and bring a sense of closure before the transition to the end of the song.

Courtesy of the Society for Music Theory comes this very impressive, in-depth article Expansive Form in Pink Floyd’s “Dogs”, by Gilad Cohen. Very well done. Probably the definitive study on understanding the song, it’s progression to final form, it’s various parts (including guitar specifics) and analysis of the music and lyrics. Great job by the author! Listen to the track while you read. I did!

Next, check out Gilmourish.com, which is “the largest David Gilmour tone resource on the net”. Great stuff. I love reading over sites like this and it would be great if there was one of these sites for just about every guitar player from the 60s through the early 80s. I would definitely read them all. Highly recommend! Here is the page specific to Dogs. In a nutshell: Telecaster + Hi Watt + BIG MuFF + MXR Phase 90 + Rotating Speaker = “Dogs” TONE DUDE!

Another of my favorite forum sites to peruse is Steve Hoffman Music Forums, home of audiophile and mastering engineer, Steve Hoffman. I’ve pulled links from here before; there are quite a few in the Glen Campbell piece I did. Here is a discussion of a part of the Dogs solo from the forum. True? Hmm? Interesting theory for sure!

Here, here, here and here, here, and here are some of the better covers/lessons of the song of YouTube.

Gearslutz also always has interesting discussions on their forums. Here is a discussion on Animals, and Dogs.

While Dogs is meant to describe a certain type of individual; an aggressive, ambitious, uncaring, alpha-male (drawn from an unlikable record executive perhaps), there are elements of the character sketch that may apply equally, to anyone. It’s a pretty cool that a piece of music with some reflective lyrics and brilliant, emotional guitar playing can illustrate the arc of life, but that is what this song does. Gilmour’s fluid and emotional guitar solos are the final voice of the song adding weight to the vocals by he and Waters. It’s pretty intense that the same triple-tracked, almost operatic guitar solo that occurs at minute 3:42 and again at 14:08 (it may even be the same solo “dropped” in) after the intervening 11 minutes and the above-mentioned descending augmented triads, sounds so different emotionally. Almost as if it is the final heartbreaking aria of an opera. Of course at the end there is death and the pain of knowing a useless(?) life and knowing that changes the whole impression of how the listener hears it. In some ways, as a concept, Animals is kind of like a mini-opera and while it was never billed as such, Pink Floyd and David Gilmour certainly crafted a definitive statement with this song and album.