The fifth installment of the GuitarSong series profiles Edward Van Halen playing his ass off on the very hot-rodded I’m the One from Van Halen 1; a defining milestone in guitar history if there ever was one. Half of the tunes on this disc would be a suitable choice for a GuitarSong, but I’m the One will do just fine. While Van Halen the player certainly deserves a lot of credit for this album, Van Halen the band: David Lee Roth, Michael Anthony and Alex Van Halen have also earned all of the cred necessary to be deemed rock legends. They each brought an indispensable quality and talent to a group that has brought many a great rock moment to fans for the last 40 years. 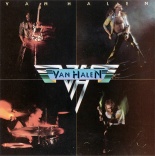 Van Halen (1) exploded onto the airwaves and into the arenas of the USA in the early days of 1978. Released in an era when many thought the guitar and rock music was dead and buried, or at least very passé, the kinetic nature of the band, powered mainly by Edward Van Halen’s incredible guitar, proved the cynics wrong and charged to number 19 on the Billboard Charts. The album has since been awarded RIAA diamond status (meaning it has sold more than 10 million copies). As I have previously written here, Edward, unlikable though he may be at times, can legitimately be called a guitar genius because: there was everything before… then there was this album… then everything was different. Have a listen to the above live version of I’m the One. If anything, he plays it better than he did in the studio and for most people, especially rock players, that would be flat-out impossible. The studio version is directly below. 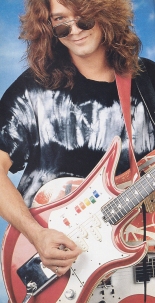 You can get Edward’s bio from these links. It’s a very interesting immigrant success story! A couple of things: a) Edward and his brother Alex are the sons of a swing era jazz musician from the Netherlands; a guy who never stopped playing but also never achieved any success until he guested on Van Halen’s Big Bad Bill Is Sweet William Now on the Diver Down album in 1982. The brothers were already playing music together before they were in high school. A whole lot of Van Halen’s first TWO discs were already written before the band was signed. The band worked their asses off to write, practice and gig and even as late as the 1984 album, material that had been in the set list during the club days (House of Pain) was reworked and released. Here is a GREAT YouTube upload of almost all of their early demos. Listening to this it’s easy to see (and hear) how the band was destined for greatness. So much great material and a top-flight guitarist who had already outgrown the LA clubs.

Another very important factor was Edward’s habit of building and destroying guitars in search of the sound and look that he wanted and the legendary Van Halen tone; the world-famous Brown Sound. This has been a topic of speculation and conversation since the late 70s and often the least helpful person in the discussion was Mr. Van Halen himself. He deliberately misled readers on his setup on at least a few occasions and he was obviously very protective of his “brand”. His explosive introduction to the rock guitar world led to everything about him and the band being copied almost immediately; from the look and sound, to the playing style (especially with regards to tapping) to the guitar with one pickup/one knob combination. The “Frankenstrat” that Edward created was the result of a lot of misses with guitar building, but it did the job and is now in The Smithsonian. Along the way there was pain, frustration and lawsuits, but that’s rock and roll. Edward was really ahead of the curve as far as “Branding” and the modern world though. Everything about the look, style and sound of what he did was completely self-created. It wasn’t completely new because very few things are, but he did put the whole package together in a rather spectacular way. (David Lee Roth probably deserves some credit as well because he recognized Edward’s talent very early on and was very instrumental in creating an image for the band and everyone in it. 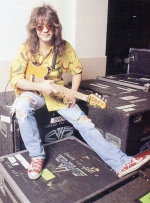 At the most basic level, what makes Eddie Edward is that he swings like a mofo. This article (which is very good) from the Van Halen News Desk suggests that Van Halen is playing some kind of wildly fun and exciting West Coast bebop on I’m the One, although not in a Jazz style per se. The kind of fluidity and bluesy phrasing along with the effortless integration of rhythm, riffing, soloing, and two-handed tapping throughout the song is dizzying. All of Eddie’s guitar moves: speedy scalar passages, two-handed tapping, (pinched) artificial harmonics, deep bending with fast vibrato and wide stretches on the left hand, are in this song and are part of the Eddie Van Halen technique.While it has long been known that Edward’s guitar hero was Eric Clapton and his closest predecessor in style was Jimmy Page (whose pull-offs on the solo for Heartbreaker inspired the tapping Edward would later perfect) I would guess that growing up listening to his dad practice swing music on the clarinet and saxophone was also very influential. That would explain the bebop-sans-jazz feel wouldn’t it? On the isolated guitar track for I’m the One, which you can find (HERE), Edward’s great right hand rhythmic swing and incredible blues feel is really apparent. It drives the whole song. I’m the One is a hi-octane boogie in the same vein as Hot For Teacher and the main riffs of both songs are great rock from the blues tradition. Edward really melds these riffs together very well and the fact that he can play them very clean at a ripping tempo is what makes the whole thing exciting. Slow this tune down and play it more laid back fashion and it could be a ZZ Top tune (a band VH used to cover). Anyone who has ever seen Van Halen live knows Edward is always tapping his foot — he has incredible timing and rhythm, which combined with a great right hand, are qualities you will find in any top-flight guitarist.

Finally, another thing I always liked about Edward was how he used effects; almost like a chef or line cook, sprinkling and seasoning here and there to spice up a dish. Mostly what one heard in the early days was the Phase 90, Flanger and/or Echoplex, but they would produce great effects in just the right places. Here is a Guitar World article on Van Halen and MXR. One interesting tidbit from the article (read the whole thing for detailed info on EVH and pedals):

Earlier this year (2015), in preparation for the 40th anniversary of MXR, its parent company, Dunlop Manufacturing, took a survey to learn how guitarists perceive the pedal maker. One of the questions asked was, “Which player do you associate the most with the MXR brand?” The respondents chose Eddie Van Halen more than 60 percent of the time. Notably, the runner-up received fewer than half as many mentions.

Here is probably the most succinct definition and exposé of the early VH sound. This is good too. If you’re looking to try to replicate, beware of anyone who over-complicates either of these two links. Really it all comes down to a Strat-style guitar body with a Gibson/Seymour Duncan PAF pickup, a Marshall Plexi and some MXR pedals. Oh…and you have to be able to play like him and most people can’t. Don’t ever underestimate how much one hands (and brain) affect the sound. They do. A lot! 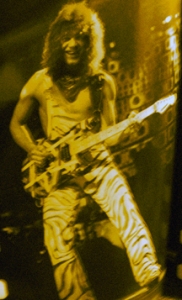 Here is Doug Steele’s series on I’m the One. I’ve recommended his video lessons before and he definitely does it right and gives you the breakdown you need to be able to get this song together.

Here is the Songsterr tab of I’m the One.

A fairly good illustration of the Van Halen pedal sound. I do not like another one that I won’t name and won’t link to suffice to say that they do a lot of videos on different players’ classic sounds and I don’t think any of them are very accurate.

Eddie Van Halen at The Smithsonian. Yes he is an institution. All Hail!

Edward certainly doesn’t always interview well and this Billboard article is no exception. I’m not sure why he has such a low opinion of Michael Anthony these days. That certainly wasn’t always true. There are some interesting factoids for guitar players in the interview though.

A somewhat funny hipster critic review of Van Halen 1. I’m linking to it because when you get right down to it, EVERYBODY has to admit this album completely rules! 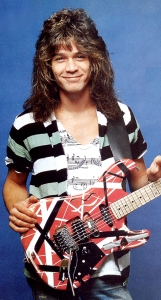 Hearing Van Halen 1; I’m the One, Running With the Devil, Feel Your Love Tonight and On Fire and then seeing the band live a bunch of times was a big influence on my life and musical career. I learned some of the tunes, played some of them (On Fire, You Really Got Me, Ice Cream Man) live in bands and musical projects over the years and even patterned my live sound after what I interpreted from the sound of this album and song. I used the Phase 90, Flanger, and though I had an Echoplex I used an analog delay pedal only because it was more reliable and easier to carry around. I still approach playing with this same gusto that I heard on this record and in some ways though Van Halen’s sound and abilities evolved over the years, there is a focus on some of these tunes, including I’m the One, that he never topped. It’s just a perfect rock rip from beginning to end. Edward Van Halen put great guitar to great songs and created an impressive body of music and in the process made the guitar an instrument people wanted to play again. Because he was so good at what he did, for a time in the 80s he completely personalized what a guitar player was. Though many years have transpired since then, with all of the attendant highs and lows that come with life, Edward can still play like a badass and I’m the One is still a great GuitarSong and a great example of virtuoso rock guitar.